Skip to content
Are you enjoying GSA News? Get news stories delivered straight to your inbox!
Thank you!
Irfaan Ali 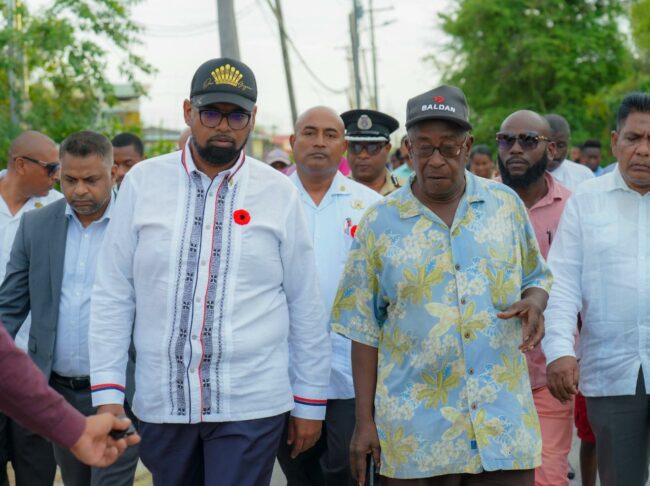 Residents of Den Amstel, West Coast Demerara (WCD), Region Three, Guyana, South America, have given the PPP/C Government high commendation for fulfilling its commitment to developing their community. Chairman of the Neighbourhood Democratic Council (NDC), Kenton Hilliman, said Tuesday, that the many interventions, particularly in the areas of roads, and drainage and irrigation have significantly benefitted farmers and the over 3,000 residents of the village.

“I need to extend a firm gratitude for the time you have been in office and for the number of interventions you have made in this community. We needed help and we got help from you,” the community leader said.

He added, “as it relates to D&I, all the interventions in this community, have been during the PPP/C tenure.”

Hilliman was speaking during a community engagement led by His Excellency, Dr Mohamed Irfaan Ali. There, the president announced a $10 million upgrade to the community centre ground, as well as the major access roads.

“I am grateful and I extend this as heartfelt gratitude on behalf of my community for the interventions you have made. They have been very significant and we are going to profit from them,” Hilliman told the president.

President Ali affirmed that the PPP/C Administration is keen on working for the upliftment of all communities, noting that “we want to see all the communities prosper.”

The president has therefore committed to providing further support to the farmers of the communities to improve agricultural production and increase the income of households.

He said that the agriculture ministry will return to the village and examine those lands that are out of production and examine ways to get them into production.

“That’s important because that is revenues sitting down and if it is we have to sit and work with the owners to see how we can come up with a mechanism to see if they (the farmers) can go back to the land or they can rent it legally to see how it can go into productive use,” he said.

President Ali and his cabinet ministers have been travelling to communities across the country, listening to residents and providing immediate interventions where possible.

The outreaches form part of the PPP/C Government’s mandate to ensure residents are provided with equal opportunities, build sustainable communities and involve the citizens in decision-making.

Infrastructural and Other Development Slated for Den Amstel, Region 3 – Ali