Skip to content
Are you enjoying GSA News? Get news stories delivered straight to your inbox!
Thank you!
Housing 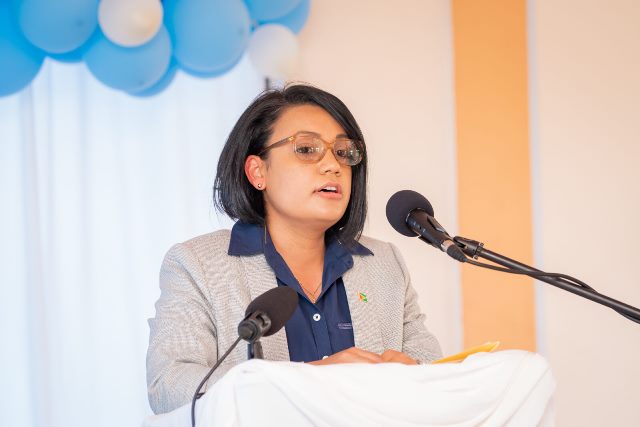 Minister within the Housing and Water Ministry, Susan Rodrigues has made it clear that the PPP/C Government has never built one-bedroom homes under its housing programme to be sold to Guyanese. Minister Rodrigues was responding to Opposition Leader Aubrey Norton who recently labelled one-bedroom homes in Prospect, East Bank Demerara, as ‘chicken coops’ and inadequate for families.

While agreeing the homes are indeed too small for families, Minister Rodrigues reminded Mr. Norton that the 400 square foot homes were built by his party in 2019 and sold for $4 million under the guise of providing housing for ‘poor people.’

“Now he has made very derogatory remarks. There are people and families who are living in those homes. I agree, the homes are too small. I wouldn’t refer to them as a chicken coop as he refers to it…he thinks he somehow hitting the PPP/C programme,” she said.

Under the PPP/C Housing programme, low-income homes are standard two bedrooms measuring 600 sq. ft and are sold at a cost of $5.2 million. In fact, the Core Homes under the IDB- funded Adequate Housing and Urban Accessibility Programme (AHUP) features two-bedroom units with kitchen and washroom areas for which persons are only required to pay $100,000.

“[Core homes] are smaller than the ones we are building and that’s being done through the IDB and that is almost free. The value is $4 million and the beneficiaries paid $100,000,” minister Rodrigues pointed out.

“He [Norton] is not referring to our low-income housing that we are building because he wouldn’t refer to them as cheap. Those are 600 square feet homes that are being built for $5.2million, cheaper costs per square footage and is much bigger and more spacious, and is given on a bigger land that was given to those people who receive those homes in Prospect.”

Minister Rodrigues said the Coalition should not speak on housing because under its tenure the ministry was reduced to a department with limited funding and no real plans for housing development for Guyanese.

“We have never built a one-bedroom house even if it is being given for free. That is APNU+ AFC’s legacy. That’s what Aubrey Norton is criticising,” she stated.

The PPP/C prior to 2015 implemented a ‘turn-key’ housing programme which allowed Guyanese the opportunity to own their own homes. That initiative was conceptualised by His Excellency Dr Mohamed Irfaan Ali when he served as housing minister.

When the government came into office in 2020, it restarted its national housing programme as it set out to deliver on its manifesto promise to deliver 50,000 house lots to Guyanese by 2025. To date, close to 17,000 Guyanese have received house lots.

Additionally, over 1,200 low, middle, moderate and young professional units were built in Regions Three, Four, Six and Ten, and the government has plans to build a number of additional units in keeping with the housing needs of Guyanese.

This is in addition to a host of measures implemented to make homeownership easier for Guyanese. Only recently, President Ali announced a 3.8 per cent interest rate on home loans up to $9 million.

Further, the government launched a Home Construction Assistance Programme to allow persons easy access to finances to construct their homes, while the homebuilder’s support initiative will allow persons to benefit from cement and steel to commence the construction of their homes.

A $600 million housing initiative was also launched in Lethem that will see the government contributing $1 million each to 600 low-income homeowners to mitigate the cost of their home construction.