Skip to content
Are you enjoying GSA News? Get news stories delivered straight to your inbox!
Thank you!
Oil 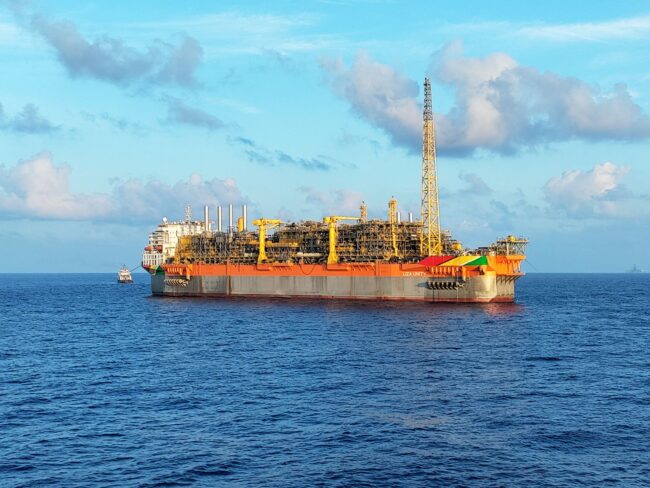 – Laws will be amended to reflect new agreement

Cabinet has granted its approval for the auctioning of 14 oil blocks offshore Guyana, Vice President, Dr Bharrat Jagdeo announced on Thursday during a press conference at Office of the President. The auction was initially slated for the end of September, however, the vice president noted that extensive preparatory work had to be completed. Government hired IHS Market as the lead consultant for this process.

The Ministry of Natural Resources, at a later time, will issue the new date for the auction. The VP assured that prospective bidders will be provided with the terms of the auction “long before” the auction is formally launched. He explained that government has decided to auction 14 blocks ranging from 1,000 to 3,000 square kilometres each, with the majority measuring closer to 2,000 square kilometres. Eleven of these blocks will be located in the shallow area, while the other three will be in the deep-sea area.

The vice president said the new fiscal regime which will not only govern the award of the contracts with the successful bidders, but also subsequent Public Sharing Agreements (PSAs) for any other exploration that is already taking place in the other areas including Kaieteur.

“So, the 50/50 profit sharing will be retained… the royalty rate will go to 10 per cent. There shall be a corporate tax of 10 per cent. The maximum for any given year going to cost oil will be 65 per cent. These are the key fiscal conditions.

Dr Jagdeo said the overall PSA will be strengthened and the laws of the country will also be amended to reflect, where necessary these amendments.

The vice president said one of the main objectives of the new fiscal regime is to ensure a greater profit share for Guyana. The other aim was to ensure that the country remains globally competitive in the context of net zero.

“We looked at the spectrum of countries and total government take, starting with those that have very small take and those that have major ones. We opted for a simple formula with fixed royalties. Some countries have variable royalty depending on the internal rate of return on the project etc.

Further, Dr Jagdeo said the consulting company, IHS market, which conducted most of the simulations, has assured the government that the 10 per cent royalty and the 10 per cent corporate tax, will ensure that the country remains competitive.

He explained that, “Under the current PSA the gross revenue every year, at the beginning of the contract, this is before you fully cover costs, 75 per cent goes to cost oil and 25 per cent to profit oil, of which we [Guyana] get 12 and a half per cent and then we get another two per cent on royalty, so we get 14 and a half per cent.

To make the bidding process more competitive, government has also decided to allow local and international companies to bid, with minimum technical and financial qualifications to be met.

Government has also decided to limit the award to a maximum of three blocks to any given company. Each bidder will be required to put up a work programme since the criteria for assessing the bids will be weighed against the price and the work programme.

In addition, the government will be tightening relinquishment provisions, “In the deep, because of the complexity, you’re going to have 10 years. So, first the initial three years for both shallow and deep for the seismic…when you move on to phase two now, after the first three years, you will have to relinquish 50 per cent of the block.”

Following this, companies will be given two extensions of one year each for the shallow areas, taking the company to five years before moving on with the work programme. The vice president said this is being done to ensure a faster turnover rate.

Survey: Most Guyanese Sorely Disappointed with Results of Oil Exploration in Guyana