Skip to content
Are you enjoying GSA News? Get news stories delivered straight to your inbox!
Thank you!
Infrastructure 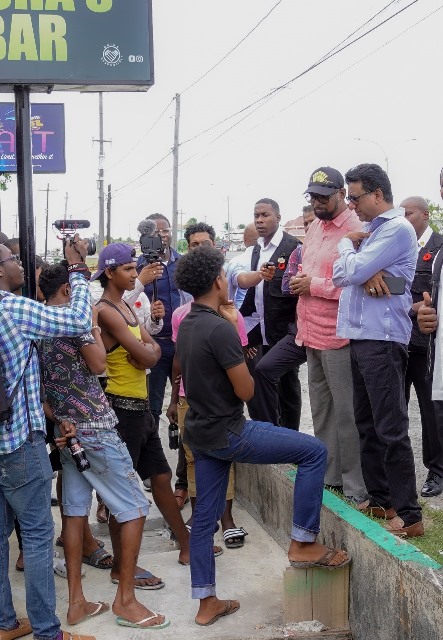 The community of Annandale, East Coast of Demerara, Region 4, Guyana, South America is set to benefit from major road and drainage upgrades. This was announced by His Excellency Dr Mohamed Irfaan Ali who led a community engagement in the area on Thursday, 3rd of November, 2022.

President Ali said the drainage issues will be addressed through collaboration among the Ministries of Housing, Public Works, and Local Government and Regional Development, as well as the National Drainage and Irrigation Authority (NDIA).

The president acknowledged that drainage is a major issue in many communities along the coast, and therefore, “they [the agencies] are going to work over the next week on a drainage plan to see how we can address the drainage issue.”

Addressing the issue of roads, he explained that several cross streets in the village were identified to be upgraded to reinforced concrete roads.

“We are looking for local involvement in building concrete roads,” he said while noting the importance of community participation to create jobs, particularly for the youths.

Another road that connects the community to the Railway Embankment will also be upgraded. He said the community developments coincide with the four-lane highway from Unity to Sheriff Street along the railway embankment.

“So, we have to now clear all that encumbrances and get the drainage system going as well and that will bring tremendous value to all the properties here,” the president noted.

Additionally, he said Minister of Culture, Youth and Sport, Charles Ramson will address concerns related to the community ground.

Further, some 50 residents in the area will finally access their legal documentation for their lands.

“So, the last Friday of this month there will be an exercise to finalise the distribution of titles so the people in this area can expect that,” he assured.

These initiatives form part of the PPP/C Government’s plan to build sound infrastructure while spurring development within communities across the country. Accompanying the president were, Attorney General and Minister of Legal Affairs, Anil Nandlall SC, Minister of Housing and Water, Collin Croal, and Minister within the Ministry of Public Works, Deodat Indar.

Annandale Roads and Drains to be Rehabilitated – Ali

Vendors to Occupy the new Mon Repos Market from Monday